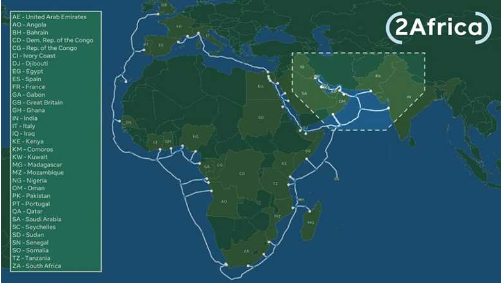 According to the introduction, EMIC-1 will land in Las Galeb in the Red Sea and Port Said in the Mediterranean, with the two landing stations connected by two different land routes. The new path is adjacent to the Suez Canal (between Suez and Port Said).

In addition, Telecom Egypt is developing a third new sea lane, the Red Sea Festoon, connecting Las Galeb and the Suez landing station, while considering a land link between Port Said and Suez along the Suez Canal – Al Morshedeen System.

When completed, the 45,000-kilometer 2Africa submarine fiber optic network system is expected to be the longest submarine network in the world, connecting 46 locations in Africa, Europe and Asia.

The system is expected to come online in 2023/2024, with key parts of the system designed to have a capacity of 180Tbps.

It is the most comprehensive submarine cable serving the African continent and the Middle East, and will also link East Africa and other submarine cables, expanding connections to Asia.

The 2Africa submarine cable has a total length of 37,000 kilometers and will connect Europe (through Egypt to the east), the Middle East (through Saudi Arabia) and 16 African countries (Congo, Côte d’Ivoire, Djibouti, Congo, Egypt, Gabon, Ghana, Kenya, Madagascar, 21 landing sites in Mozambique, Nigeria, Sudan, Senegal, Somalia, Tanzania and South Africa), is one of the largest submarine cable projects in the world.

2Africa provides much-needed internet capacity and reliability across much of Africa, compensating for rapidly growing capacity needs in the Middle East and supporting further growth in 5G and fixed broadband access.

According to plans, the project will be completed and commissioned in late 2023 or early 2024, and upon delivery will provide the continent with “significantly higher” capacity than all current existing cables combined.