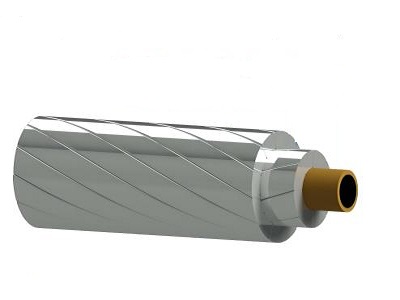 In particular, ACCC conductors have been used to increase the efficiency of the re-conductor portion of the transmission grid by 30% or more.

ACCC cables use lightweight, small size carbon fiber composite cores. It not only increases the load-bearing capacity of the overall material but also reduces the core volume of the new ACCC cable. ACCC cables can provide double the power of ordinary traditional cables, and can effectively solve the problem of cable sag caused by high temperature. ​​

While aluminum strands are fully annealed to provide the highest degree of electrical conductivity of any aluminum material available today, the composite core material has a coefficient of thermal expansion that is approximately ten times that of steel.

ACCC aluminum conductor composite core is the latest type of stranded conductor, which is mostly used in overhead transmission lines. Under the same conditions, it has twice the capacity of ACSR.

ACCC conductor hybrid core is not only twice as strong as steel but 70% lighter. The lighter weight allows ACCC conductors to use approximately 28% more aluminum without adding weight or diameter.

Compared with the same diameter ACSR cable, it can provide double the current carrying capacity. Effectively solve the problem of cable snagging. They can work at higher temperatures up to 200 degrees Celsius. And the core is corrosion resistant and there are no bi-metallic corrosion problems. Because it can provide higher current-carrying capacity, it also effectively reduces engineering costs.