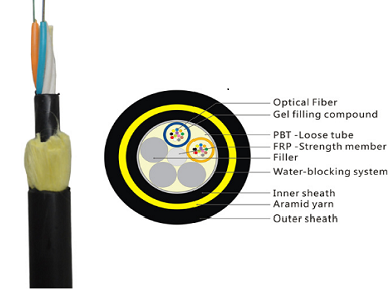 The optical cable is mainly composed of optical fiber, plastic protective sleeve and plastic outer skin. There is no metal such as gold, silver, copper and aluminum in the optical cable.

The basic structure of optical cable is generally composed of cable core, reinforcing steel wire, filler and sheath, etc. In addition, there are waterproof layer, buffer layer, insulated metal wire and other components as needed.

The integrated wiring project is a relatively complex project, so it is impossible to ensure zero faults in the construction of the project. However, it is relatively easy to minimize the faults and mistakes. There are four major reasons for the failure of fiber optic cable lines.

The Impact of Lightning

The armored components of the optical cable are all metal conductors. If the power line is short-circuited or the lightning strikes the metal parts, a strong current will be generated to damage the optical cable line equipment. And even serious casualties will occur.

The Insulation of the Optical Cable Is Not Good

The Influence of External Forces

Fault at the Line Connector

Faults are most likely to occur at the line joints. This is because the optical fibers at the joints no longer have the protection power to the original optical cable structure or the protection power has been significantly weakened. So the daily operation and protection work can only be carried out by relying on the joint box. The probability of failure is greatly increased.

Optical fiber cable is a new generation of transmission medium. Compared with copper medium, optical fiber has greatly improved in terms of security, reliability and network performance. In addition, the bandwidth of optical fiber transmission greatly exceeds that of copper cables. And about the maximum connection distance, it supports is more than two kilometer. And it is an inevitable choice for building larger-scale networks. Because the fiber optic cable has the advantages of good electromagnetic interference resistance, strong confidentiality, fast speed, and larger transmission capacity. Its price is also relatively expensive, and it is rarely used in household occasions.

For more information about cable products, welcome to contact us directly.